The Omega Speedmaster has been extensively researched, discussed, obsessed over, and publicized. If you have been around watches for long enough, you’re certainly aware of the watch’s historical significance and beloved stature within the collecting community, and for loyal readers of this site, you’re also well aware of my love for the Omega Speedmaster. So with that in mind, instead of boring you with the historical progression of Speedmaster design, I’ll just refer you to this Reference Points by HODINKEE from a few years ago. Did you get a chance to digest all of that? Feel like you know everything about the reference 105.003 now? Great, let’s skip ahead to the story behind my 105.003-64 Speedmaster.

When it comes to risk/reward in vintage watches, one marketplace stands above the rest: Craigslist. If you’re familiar with my collection, you’ll know that a number of my watches have emanated from that site, often in unprepared states from the original owners. Craigslist can yield true treasure, but the best way to mitigate risk and (most importantly) close the deal is to have “feet on the ground” in the cities that you’re scouring, as sellers are always predisposed to an in-person hand-off within a secure location. Preferably, those feet belong to somebody who understands watches and can provide a sanity check after inspecting the watch in the metal. More often, however, it’s a family member or non-watch obsessed friend who is willing to pitch in, which was the case with this Speedmaster.

In December 2017, I embarked on my frequent Craigslist trolling routine and encountered a dark, poorly composed, and blurry picture of a straight lug Speedmaster for sale in Dallas. Upon closer inspection, it appeared to be an Ed White Speedmaster on it’s original flat link bracelet. The watch was not priced cheaply, but the few pictures in the ad seemed to show a brown dial, fat case contours, and what appeared to be a perfect bracelet. The ad had only been up for a matter of hours, so my excitement ratcheted up several pegs as I hurriedly reached out to the seller.

This next part is important, kids: don’t try this at home. I soon heard back from the seller, and given the rarity of the find (a tropical Ed White from the original owner’s family), I decided to roll the dice and speak for the watch without asking any further questions. I committed to purchase the watch in-person within a matter of days, and as soon as we had agreed on a deal, I immediately set out to find someone willing to act as my proxy for the transaction. Having gone to college in the Dallas-area, I enlisted my old roommate (and Best Man in my wedding) to help me carry out the transaction despite the fact that he knew nothing about watches.

Soon after tapping my friend to help secure the watch, I wired him the funds (to allow him to pay the seller in cash) and coached him through the basics of buying a five-figure watch from a stranger on Craigslist. “Make sure it’s in your hand before you give him the money…don’t change venues if he asks…make sure to text me a picture as soon as you have the watch.” After that, all I could do was wait.

Once the deal had been completed, I received two hasty iPhone pictures of the watch in my friend’s possession (see below for those pictures). To say that my heart sank is probably overselling my reaction – I had still purchased an attractive Ed White Speedmaster at a slight discount to the market value – but the tropical dial that I had been dreaming about wasn’t there. Just a normal, old Speedmaster. The seller had taken the poorly composed pictures at night in a room with strong yellow light, which must have explained why the dial appeared to be lighter than the standard black dials. As my excitement gave way to regret, I cursed my impetuous and slightly greedy approach to the purchase. I wouldn’t lose money on the watch if I subsequently sold it, but I also wouldn’t make any money and I’d coerced a non-watch friend into spending his time effectuating the sale. At a certain point, the thrill of the hunt can be toxic.

After landing at dusk, I texted my college roommate (who still had the Speedmaster) and asked if he could bring the watch over in an hour. Grateful to finally release himself from the liability of safeguarding the watch, he agreed to swing over. As I met him at the curb and quickly inspected the watch in the dark, it appeared to be just as the pictures showed: a perfect 7912 bracelet, a strong case, slightly uneven patina, original “flat foot” crown, and a standard, black dial. As I thanked him for his effort and said goodbye, I mentally prepared to have the watch serviced and prepared for sale as soon as possible. I already had an Ed White Speedmaster that was invaluable to me, so there was no way I could justify another 105.003 Speedmaster if it wasn’t unique or special in some way.

But as you are already well aware, this Speedmaster was most certainly unique – I just hadn’t realized it yet.

I walked back into the house and sat down at the kitchen table to test out the winding and chronograph functionality, and that was the moment when I finally glimpsed the pearl within the oyster. As I tilted the watch to wind it, the bezel turned a vibrant shade of blue, nearly to a degree that made me wonder if my eyes were playing tricks on me. How had I missed this in all of the pictures? I suppose that an incredibly astute eye could have picked up on it from the first picture that my old roommate had sent, but there was no sign that the bezel had the ability to turn that…blue. More than I care to admit, I become most interested in learning about rare variations of watches only after I’ve already purchased an example. Perhaps it’s human nature to have a deeper interest in something once you have experienced it intimately, or have made an emotional (and / or monetary) investment…or perhaps I’m a textbook narcissist. Regardless of my motivation, the rarity of blue-bezeled Speedmasters began to interest me and I’ve since done a deep dive on all publicly shown examples in an attempt to codify the references / serials and create an “acceptable range” for these beautifully defective bezels.

So at this point, it’s worth briefly discussing this unique Speedmaster’s perceived value to many collectors. Does a piece of painted aluminum that’s turned blue really alter the price that someone is willing to pay for the watch? In my opinion, yes. As one progresses through collecting vintage watches, there is an innate drive to find examples that stand out from the rest. That differentiation can be based on condition and rarity, or in cases like the watch at-hand, a distinguishing feature that has transformed the appearance of the watch. Strap a blue-bezeled Speedmaster on your wrist and you’ll be unlikely to ever run into another collector wearing a similar example. 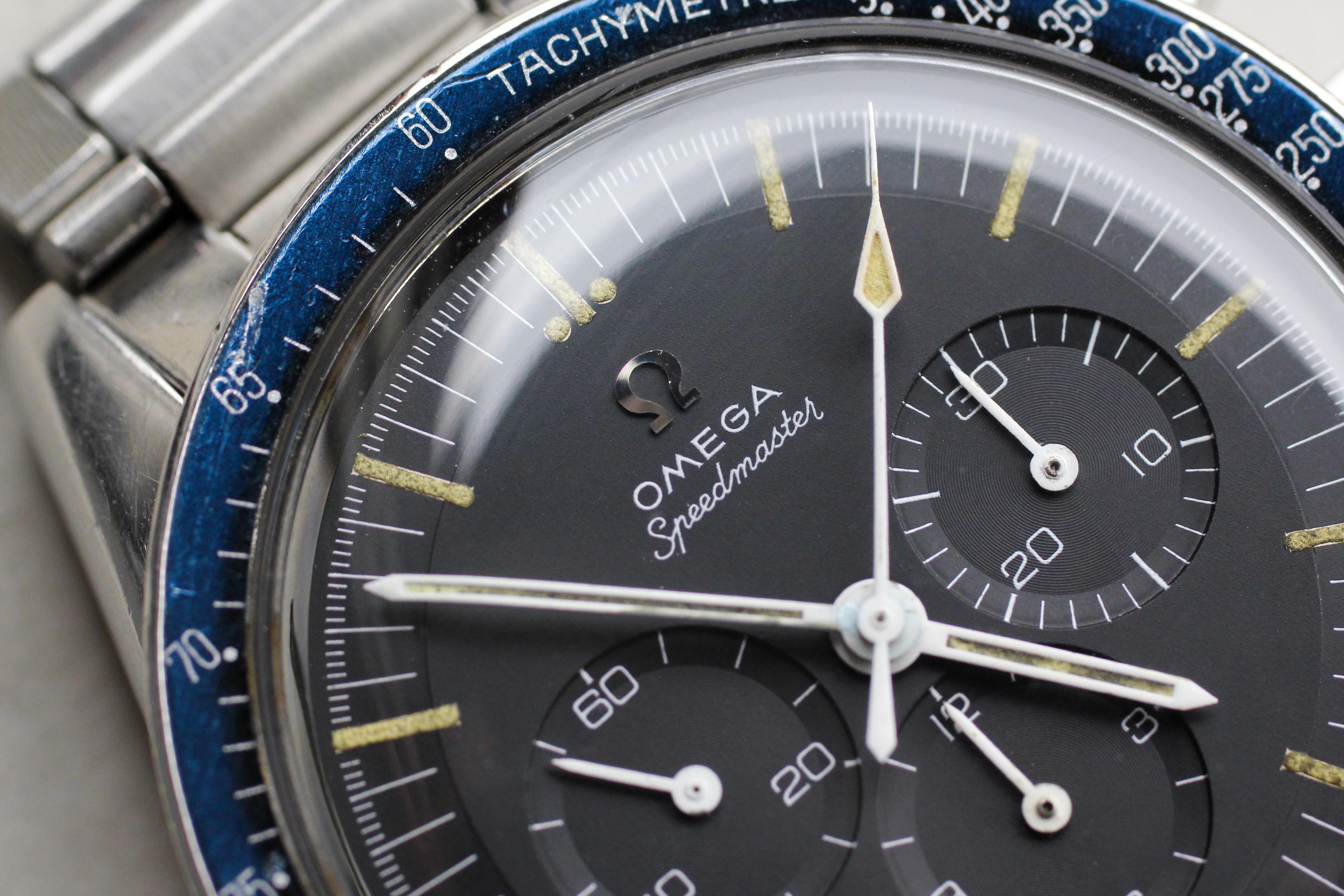 I’ve spent much of this space discussing the bezel, but it would be a disservice to the “Fine Print” section of this post if I did not discuss the rest of the watch. Collecting Omega Speedmasters is all about nuance and attention to detail. One example of this nuance is the subtle difference in case profiles within the 105.003 range, as the reference 105.003-64 is the lone 105.003 that does not have beveled edges on the top of the lugs. Dial differences also exist, as this -64 reference has a smooth dial texture with light concentric circles in the subdials, while the more common -65 has a gritty texture and more visible concentric circles within the subdials.

The case and caseback on this example are very sharp and I believe the case to be lightly polished, if at all. Additionally, the 7912 bracelet (with all-important #6 end links) had no stretch and minimal wear, which was a delightful bonus. The dial itself is in good condition with no markings or blemishes, though the lume plots have not aged in a uniform manner and half of the plots could be considered “dirty,” thereby reducing the visual appeal of the watch. Similarly, the hour and minute hands have spotting and darkening throughout. There are nicer examples that exist, but very few that include an original blue bezel, and despite the darkened lume, this has become one of my most-worn Speedmasters.