Earlier this year, I decided to part ways with my Heuer Autavia 3rd Execution “Jochen Rindt,” a watch that was an absolute grail in every sense, but had experienced a monumental run-up in value since my initial purchase. I became almost…scared…to wear it, lest I should knock out a chunk of lume or put an oversized dent in the case (not that I’ve ever done that with any watch, but the sheer thought of doing so was enough to dissuade me). Stockpiling grail watches in a dark bank vault holds very little appeal to me personally (why own them if you don’t wear them?), so I ultimately decided to search for a new home for the Rindt. Thankfully, my Autavia was a near-perfect example of one of the most coveted Heuers on the planet, which opened up a number of paths forward. Ultimately, I set my sights on finding a mutually beneficial trade with another collector rather than selling the watch outright, and after fielding a number of offers over the first week, a handshake agreement was reached with a collector who I greatly respected (@heuerautavia on IG). In exchange for the Rindt, he sent a Rolex GMT Master (1675 gilt) as well as the Omega Seamaster 2913-3 that you’ve clicked on here. In terms of monetary value, it was a fair trade. In terms of rarity, this watch by itself was worth it.

If you’ve spent any time around the watch world in 2017, you’ve likely been inundated with advertisements for Omega’s 60th Anniversary “Trilogy” line-up that was re-released to near universal acclaim (shown below). The 2915 Speedmaster will always be the most iconic of the trio, and because of its moon-sized shadow (fueled by an abundance of scholarly research on each historical Speedmaster reference), the original 2913 Seamaster and 2914 Railmaster haven’t enjoyed similar public appetite to-date. That’s not to say those two watches aren’t also highly sought after – they certainly are – but the types of collectors who have sought them out (so far) have been Omega-centric completists, rather than the well-heeled sorts who attend high-powered auctions and spend six figures on vintage Rolex. While a nice 2915-1 Speedmaster commands $100K+ in these aforementioned high-powered auctions, the other two members of the trilogy have hung back value-wise and remain more approachable to collectors…if you can find one. And it’s within that context especially that I was drawn to the watch you see here. 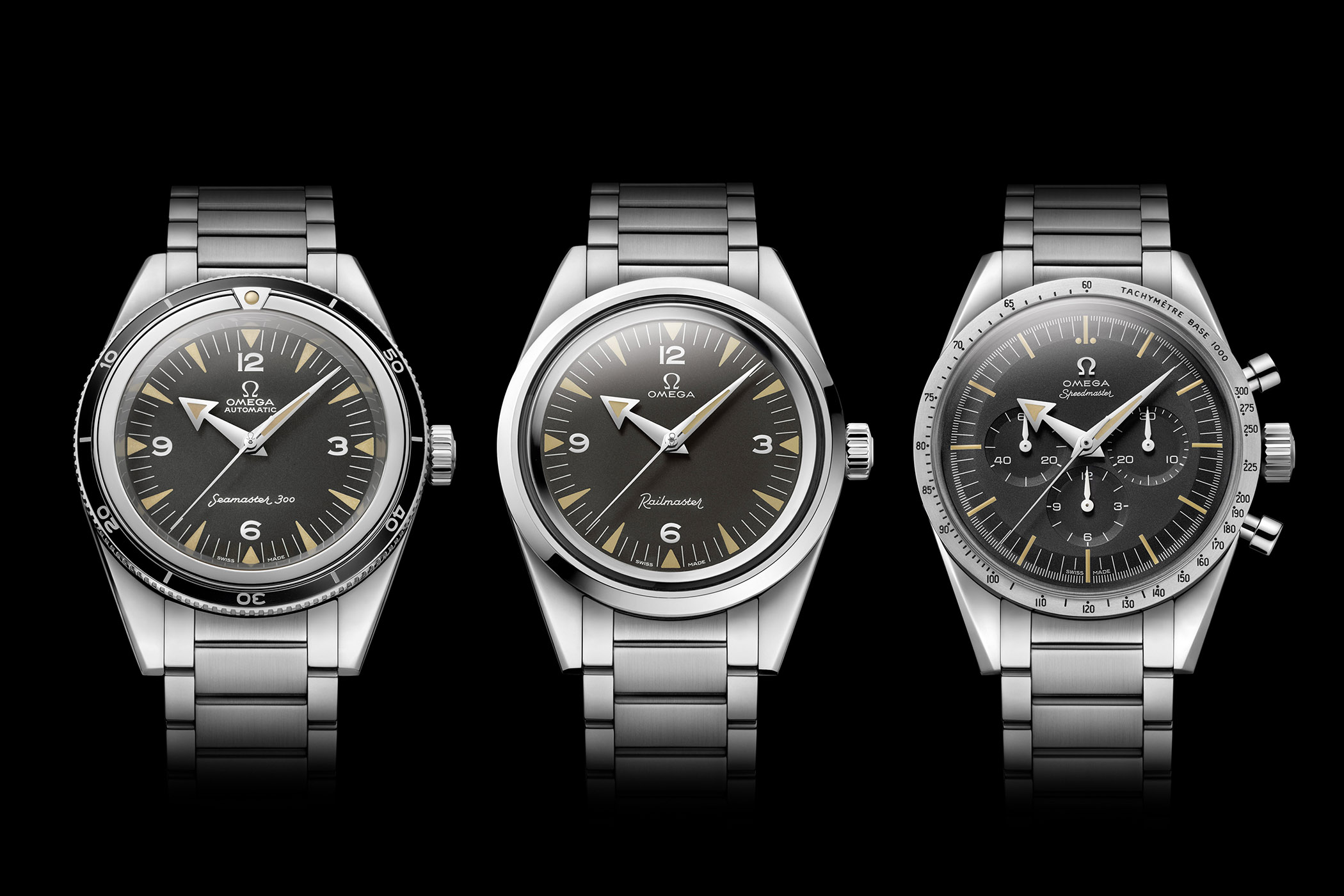 As I mentioned above, the internet is an overflowing geyser of information when it comes to the Speedmaster. Want to know about a reference 145.022-69 that you found on eBay? Great! Type it in and you’ll find multiple sites, forums, and broader articles like Hodinkee’s Reference Points to guide you through the model’s evolution and help you cross-reference the minutia to confirm originality. But say you want to do the same thing with a 2913 Seamaster, which had EIGHT separate iterations…unfortunately your best bet is to dig on Omega Forums for a relevant thread that might discuss your reference in question. This “information inacessability,” if you will, is partially why I believe the Seamaster hasn’t received its due from the masses yet, and it was also the main reason that I hadn’t taken the plunge on an early Seamaster to this point in my collecting journey. One of the most important lessons I’ve learned in vintage watches is to know what you don’t know, and avoid those situations until you do. If the opportunity to purchase an early SM3oo from a fellow collector had not presented itself, I may still be on the sidelines longing for one but not jumping into the deep end.

Despite the steeper learning curve attached to the 2913 Seamaster, in my opinion it deserves to be taken just as seriously as the Speedmaster in terms of rarity and importance. The Seamaster line has proven to be as much of a staple for Omega as the Speedmaster, and over decades of usage, Seamasters have both graced the wrists of service members in combat and fired lasers in order to save James Bond from an untimely demise. That doesn’t even consider the wide variation of the Seamaster line, which ranges from gold 1950’s dress watches to literal chunks of steel (the Ploprof), and in aggregate the Seamaster would likely comprise the majority of watches produced by Omega over the last 70 years. The reference 2913 was central to the entire Seamaster line’s shift in aesthetic and function, and to me, that’s basis enough for original SM3oo’s to proudly stand next to the Blancpain Fifty Fathoms and Rolex Submariner as some of the most formative early dive watches ever made.

So what does the future hold for early Seamasters in terms of value? Though the sample size is limited, it appears that 2913 Seamasters have begun to angle up into the mid-teens – though we probably won’t see how high the ceiling is unless a nice early 2913 is featured by a major auction house alongside its contemporaries (the Fifty Fathoms and Submariner). In my opinion, this watch’s time in the sun is coming, so if you have a chance to purchase one in the near future, I would not think twice. Once the door closes, it’s unlikely to ever be open again.

Finding a 2913 Seamaster is a tall order (in any condition). Finding one this good? Damn near impossible. I’ll be honest – the stars aligned to bring this early 2913 into my stable of watches, and without the trade, I probably wouldn’t have one. For every ten examples that surface, I would say ~8.5 have very clear issues – the most common includes a degraded dial due to the sunken radium lume plots. Other common issues include poor case condition, missing bezels, and “dirty” lume. This example exhibits none of those issues, with the exception of the bezel, which is a reproduction bezel from Aldo in Italy (essentially the only shop in the world capable of re-creating the original SM3oo bezels to an amazingly accurate degree). Original bakelite Seamaster bezels rarely survive intact (similar to bakelite 6542 GMT bezels), so if that issue would hang you up as a potential buyer, peace be the journey – you may as well move on to a different conquest.

As for the rest? I think the lume speaks for itself. The dark creamy hue of the radium lume is practically the basis for the re-issue’s faux patina coloring, and thankfully it has not degraded the surrounding dial. As I mentioned above, the lume plots on SM3oo dials were literally sunken into the dial and filled with luminous material, which is why it so often “burns” the surrounding areas of the dial over subsequent decades. The straight lug case still retains its original lines and is thick, though the original crown has been lost. Finally, the caseback still shows the hippocampus engraving surrounded by the words “Certified High Pressure Waterproof.” This piece of machinery was meant for active use, and many, many examples were used accordingly. Comments Off on Omega Seamaster 2913-3